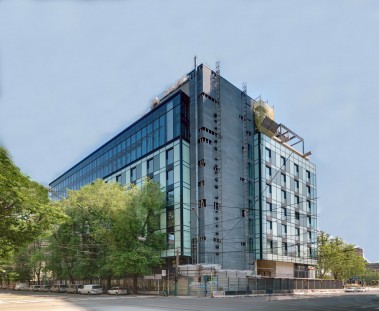 At the beginning of 2013, Lizzio srl obtained one of the most important contracts in Italian construction: not far from Milan Central Station, the new Hotel Gallia, a 5-star hotel designed by one of the most renowned figures of Italian architecture: Marco Piva.  The hotel covers a surface area of 30,000 square metre in an area of 4,000 square metres entirely renovated and modernized during 2013 and flanks a building of new concept which stands in the Duca D’Aosta Square, Via Galvani and Via Filzi.
The project combines the requisites of the owner and the designers in the search for balance between ancient and new, in a dynamic relationship of shape, space and materials.
After having had countless stone samples tested by experts, the client entrusted the supply to Lizzio srl, who surpassed the competition of the most noble of materials, succeeding in inserting Basalt, extracted from its own quarry, in the ventilated façade of the building, with a “brushed-satin” surface finish.
The exquisite and highly appraised final effect allowed Lizzio srl to undertake a very important job in the centre of Milan; the use of our Basalt a stone’s throw from the Pirelli Skyscraper in the heart of the Milanese/Meneghino city, certainly representing a starting point for our Lava Stone extracted from the Etna volcano, whose characteristic techniques and aesthetics today make it a product whose use in this type of project is an established reality.