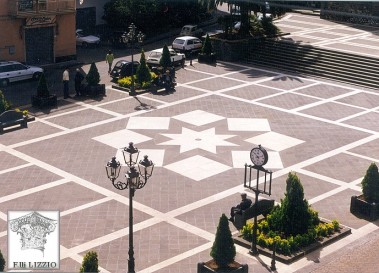 Randazzo, whose territory is an integral part of the Park of Etna, is a characteristic town on the northern slope of Etna.  It is full of medieval history and situated at the centre of what was once the Val Demone.  Its streets, its characteristic alleys and squares have, over the centuries, been ‘paved’ with the black gold of Etna: Lava Stone.  Thanks to the varied mechanisms launched to revitalize and safeguard historical town centres, Lizzio srl has contributed, in various stages during the last six years, to the redevelopment of the entire town centre, supplying the goods necessary to carry out the paving of squares and streets in the heart of the town.
The last intervention, in time order, was the redevelopment of Via degli Abruzzi, carried out in 3 months with products of various dimensions and, as historical tradition dictates, the outer stone surface was hand-worked with ‘Puntillo’ by Lizzio srl’s own stonemasons.